HTML Templates allow you to specify templates that you can later reference with JS and insert where you see fit. Templates are an alternative to writing HTML strings inside your JS code. Instead of having to concatenate a bunch of strings to form an html snippet now you can write it in HTML inside a template tag and then just use its content.

The template tag is only intended to save a template for later use, for that reason it doesn’t render anything in the browser and its content is not available for scripting until you add its content to a DOM element.

It’s most simple use would be to create a template and insert its content into another element. Lets start with this HTML:

Now we can use this template to create another element:

As you would expect, the content of the template will be appended to the body:

Once you have cloned the template you can use JS to modify the structure, attach event listeners or do whatever you need.

If you have used Angular, you are familiar with creating new elements. They call them directives. If you are not familiar, it doesn’t matter. Custom elements are just custom tags that look and behave in a similar way. The way they look and behave is defined by the creator of the custom tag, which will most likely be you.

When creating custom elements you have to keep in mind two restrictions about their names:

This is enough information to start using crazy tags all over the place:

This works, but is not very useful, something more useful would probably be:

From looking at this HTML we can easily guess what it does. It is an accordion and the first item is active when it is rendered for the first time. Even though it makes sense for us by looking at it, the browser doesn’t really know how to render it:

We can fix the way it looks with CSS:

It now looks a little better:

It is kind of cool, but it is not bullet-proof. Even though our element name is named-spaced, someone can still overwrite the CSS if the wanted(or by accident if there was a name crash). The same thing goes for the functionality. Shadow DOM helps us keep our custom elements the way we want them to be.

We would expect to see the text “Hello” in the screen, but instead we see nothing:

Which gives this result:

There are some more advanced things that you can do with insertion points, but when you need more power, you can always use JS do manipulate the DOM.

The utility of shadow DOM is not only in hiding the HTML to the user, but also in isolating CSS:

Lets understand what is happening. First we see a green border surrounding our component. This is the border we are setting on all div elements on the document. When we use an insertion point, we grab all the content inside the hello element, but it is still a div from the outside so it will still be affected by the style definitions in the document.

Then we see that the paragraph inside our shadowed element has a blue border. Notice that even when the “body p” style definition has higher specificity than the one inside the template, the border is still blue. This is because the elements inside of the shadow DOM can only be styled from inside the shadow DOM.

Finally, you see a paragraph with a red border. This paragraph lives outside our custom element and for that reason follows the styles defined in the document.

Lets make a slight change and notice what happens:

I changed the message from “Hello” to “Hello <p>world</p>”. Lets see the result: 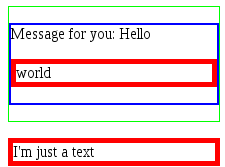 You might have expected “world” to have a blue border(at least that is what I expected). Instead it has a blue border. This is because elements added to the shadowRoot using insertion points will also be affected by styles from the outside.

Now that we know how the shadow DOM works, lets create an accordion that will look an behave correctly regardless of the environment:

This might look like a lot of code, but keep in mind that from now on the user of your components only needs to import your component and then she will be able to create accordions using the html interface. Now lets look at how we can distribute our components:

We have now created an accordion that can be reused in different environments because it doesn’t pollute the CSS or JS space. Now we need a way to distribute our web component so people can start using it.

HTML imports are very simple to use. First lets move our component code to its own file with just some small changes:

The most important change happens on line 36. The loaded HTML file is not automatically included into the page(document) context. Instead it has its own document context that you can get using document.currentScript.ownerDocument. This is important because on line 45 I try to access the template declared in this document. If I tried to do document.getElementById(‘adr-accordion-template’); I would get an error because that element doesn’t exist in the page context. Everything else works pretty much the same way. Now we only need to use it:

And that’s it for now. We created a reusable web component. There is a lot of things that I didn’t cover, but I think this is good to get you started.