A service worker is a script that can be used as a client-side proxy for network requests. When the browser makes a request, a service worker can intercept it and decide what to do with it. This article is going to focus on using service workers for client side caching of web apps.

Why use service workers?

Service workers can be used to improve the performance and user experience of an application. They can be used to cache assets that are commonly needed but don’t change often, or to provide offline functionality.

For security reasons, service workers only work over HTTPS.

Before using a service worker, it is necessary to register it. In the HTML of the page, add something like this:

The code above first verifies if the browser is compatible with service workers. If it is, it will try to download /worker.js. This file is going to have all the code for the service worker.

There is a callback for success and one for failure. The registration can fail for multiple reasons; One of the reasons could be the service worker not being found.

If you look at the success callback, you will notice that it receives an argument. The argument is a ServiceWorkerRegistration with some information about the service worker. One of the properties of this object is the scope.

A Cache is a key-value store where the key is a Request and the value is a Response. When we intercept a request we want to cache, we will wait for the response and then add it to this storage.

A CacheStorage is a key-value store where the key is a string representing the name for a cache and the value is a Cache object. It is possible to have multiple caches; for example: “STATIC_ASSETS”, “API_REQUESTS”, etc. Most often you’ll interact with a global variable named caches which is an instance of CacheStorage.

To create or open a Cache, we can use the open method:

If a cache with that name doesn’t exist, an empty Cache will be returned.

We’ll look more closely into Cache later in this article.

It’s time to move to the service worker code.

After a service worker is downloaded, it will be “installed”. As part of the installation, an install event will be triggered:

One common step as part of the installation of a service worker is downloading and caching assets. Let’s say we want to cache the app logo:

I added some comments, explaining what is happening. If more than one asset needs to be cached, addAll provides a way to do this:

Before we move further with service workers, I think it’s good to talk a little about debugging.

One thing to understand about service workers is that they follow a different lifecycle than the web app they support. When an app is loaded for the first time by the browser, and it registers a service worker, the service worker will be downloaded and installed, but it won’t be used for that session.

To see the service worker in action you might need to close the current tab and open a new one.

Usual debugging primitives can be used. console.log and debugging will work as expected if used inside service worker code.

Another tool that can help understand what is happening, is the browser developer tools. In Chrome, the Application tab will show you information about the currently installed and running service worker: 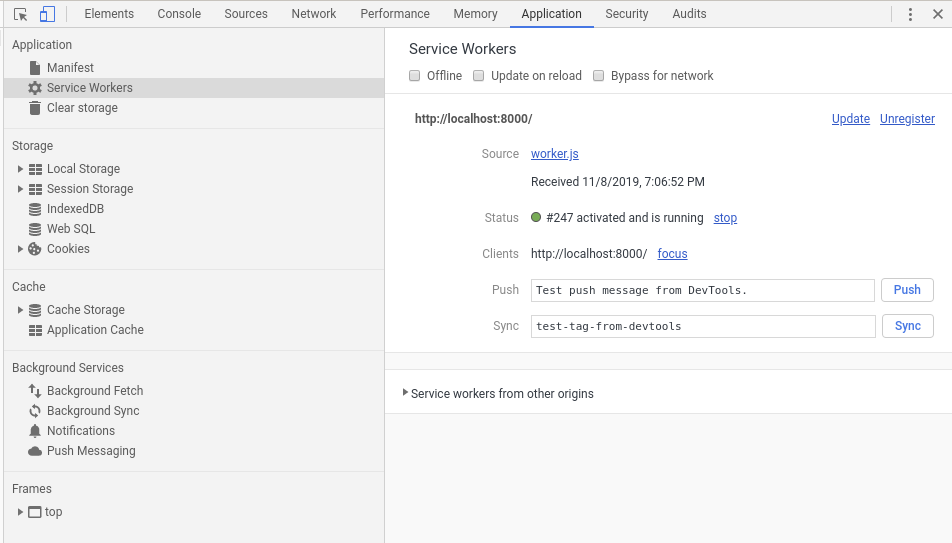 In the cache section in the same tab, you can inspect the contents of the cache for your service worker: 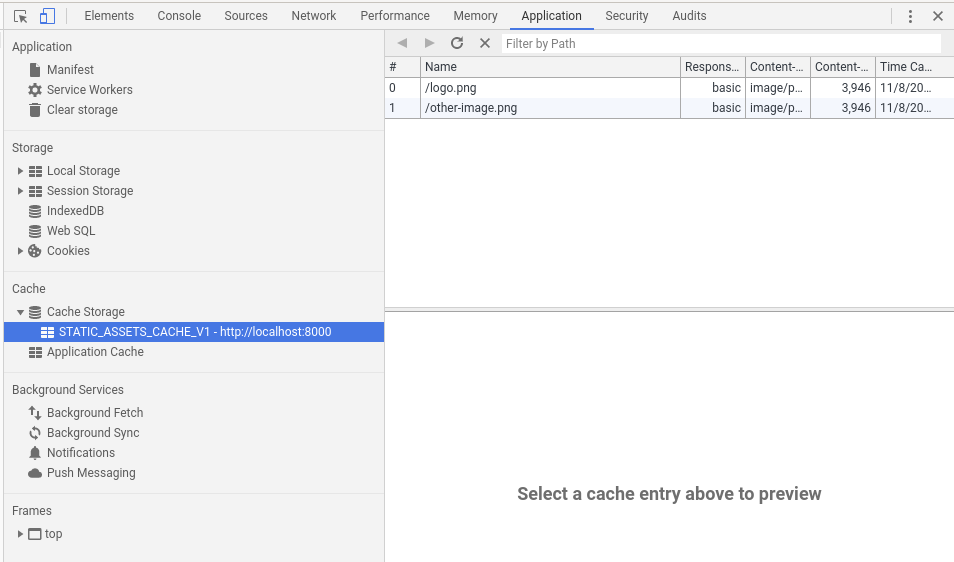 Once we have some responses cached, we need a way to retrieve them from our cache instead of making the actual request. Here is where fetch comes into play:

The example above shows one of the simplest ways to serve a response from cache. A more elaborate example would be to try to find a request in the cache; if it’s not found, make the request and cache that response to use in the future:

The code above shows an example of caching requests on the fly. A small problem with the code above is that once it caches a request, it will always return a response from cache, which might not be what you want in all cases.

What and when to cache

Knowing how to cache requests is the easy part. The hard part is knowing what to cache and when.

First of all, the data we can store in the cache isn’t unlimited, so we can’t store everything there. The limit is somehow opaque to developers so the application needs to be written with the assumption that things can disappear from the cache at any time.

I don’t claim to know everything about caching, but I’ll list some things that I like to keep in mind:

In the example above, I only treat images as static assets. I use request.destination, which returns a RequestDestination string depending on the type of file being downloaded.

For application files, we can check if it’s a script or a style:

This scenario will be handled the same way as images (serve from cache if available).

For API requests we might want to cache only some URLs, so we check the path of the request. In this case we only serve from cache if the network request fails:

Note that the fetch call is wrapped in try-catch. This is done because a network error will throw an exception. Since we want to serve from the cache when this exception is thrown, we need to catch the exception.

In this article, I show some examples of how to store and retrieve responses from cache and some recommendations for when to do it.

Caching can get tricky, so make sure to test your application online and offline if the cache policy changes.

Introduction to Next JS - React framework