An HDD comes in a a rectangular box made of metal: 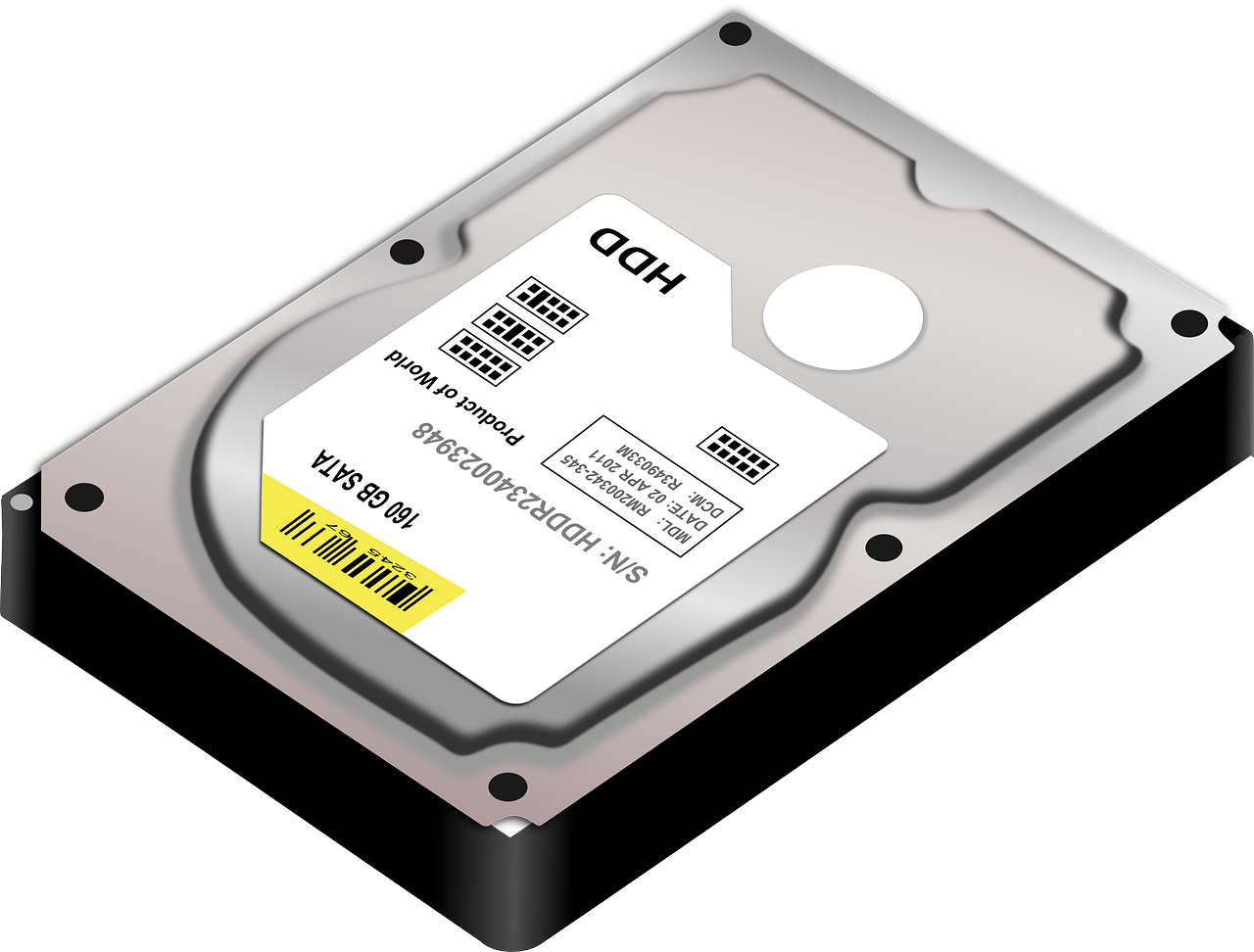 This metal box is designed to protect the moving parts on the inside, which are the ones actually doing data writting and reading.

If we open the box we’ll be able to see the disk: 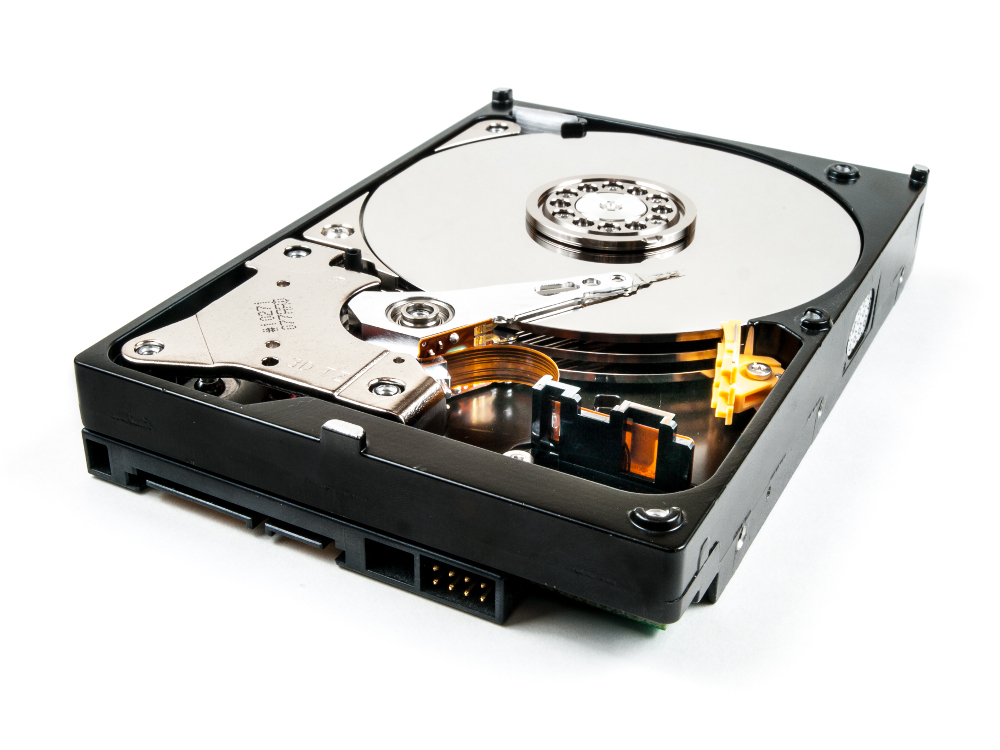 There is a mechanical arm that can move the heads to the inside or outside of the platters. Because there are multiple platters where data can be written, there are also multiple heads. Modern HDDs allow storing data on both sides of each platter, so there will be twice as many heads as there are platters.

There is only one mechanical arm that moves all the heads at the same time. If the disk is asked to read a few chunks of information on different platters, it can’t send one head in one direction and the other head in another direction. Even if the disk was asked to retrieve data that is in the same location in multiple platters, a disk can only read or write data from one platter at a time.

The head at the end of the arm is the piece of technology that allows writting and storing data on the disk. When the disk needs to read a bit, it moves the arm to the right location, waits for the platter to spin so the data is underneath the head and it transforms the magnetic field into an electrical current that is interpreted as a 0 or 1. When the head needs to write, it does the opposite. It receives an electrical current and transforms it to a magnetic field that is stored on the platter. 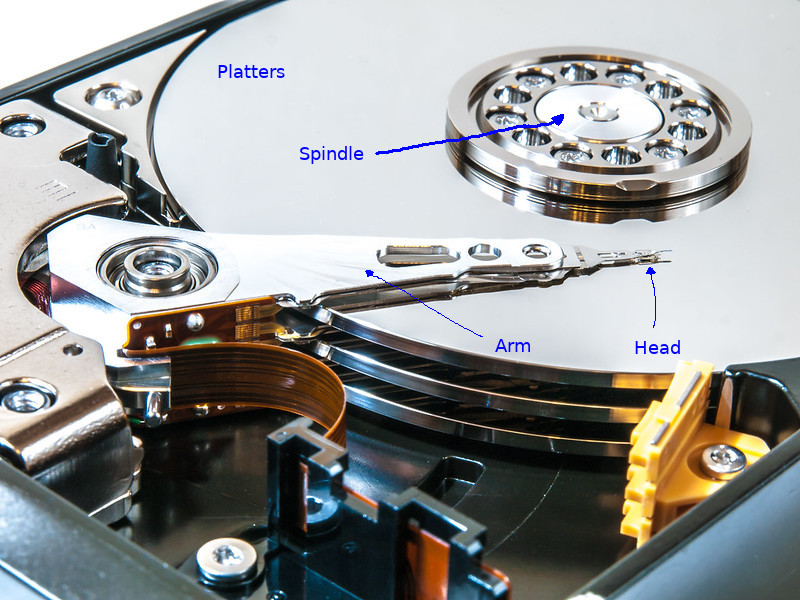 When working with Hard Drives, it’s common to hear different terms to describe parts of the disk where the data is stored.

Cylinder-head-sector (CHS), is a way to address data on the disk based on a coordinate system. The system is pretty old and not used by most HDDs anymore. It’s still common to hear references to it, so I’m going to explain it.

Each platter is divided into tracks and sectors that together identify a specific block (An addressable amount of data): 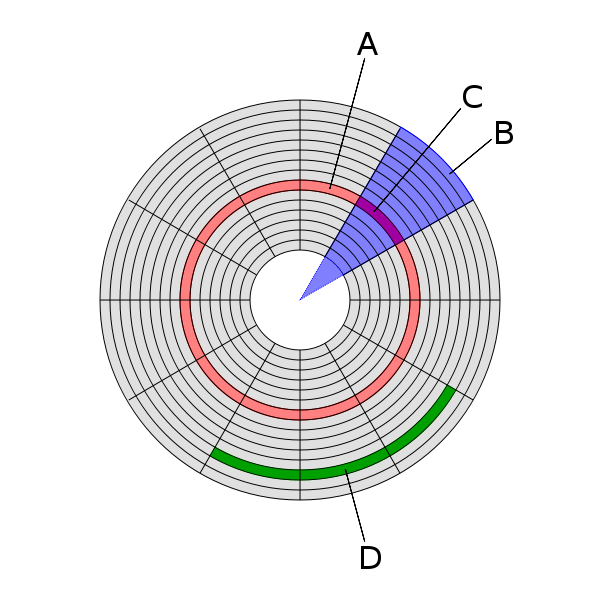 From the image above:

Because modern HDDs have multiple platters, CHS, uses the term cylinder to refer to the same track on multiple platters (Imagine a cylinder that intersects with all the platters at the same time). It is also necessary to specify the head so the HDD knows which platter surface to read or write from.

Logical Block Addressing is the way modern HDDs use to address data.

While CHS uses a coordinate system, LBA uses a much simpler linear system that abstracts the internal structure of the storage device. To refer to data in an LBA device, you just need to specify the index (from 0 to N, where N is the number of blocks on the device).

Most modern storage devices support LBA. For older devices, the Operating System performs a translation from an LBA index to a CHS coordinate.

I wrote this article because I want to get more familiar with how data is stored by computers. Here I explore how an HDD is built and two common ways of addressing data. As part of my learning I will try to write an article describing techniques for using HDDs efficiently.