Introduction to networking in Google Cloud

Google uses the concept of Virtual Private Cloud (VPC) to refer to their capability for creating your own private network withing their infrastructure. There are a few terms that will allow us to create a network of our design:

A network (or VPC) is just a name used to group your network infrastructure. Subnets are defined inside a network and each host is part of one subnet.

The best way to understand how networking works on Google Cloud is to create an example network. Before we start clicking buttons and configuring things in the console, lets start by defining what we want to build:

The network and subnets can be created from Google Cloud console. We just need to enter the name for the network and the name, region and CIDR for the subnets:

The next step is to create the virtual machines. There are a few options to choose here, but the ones we care about are the machine name and the IP address (which can be set in the network section): 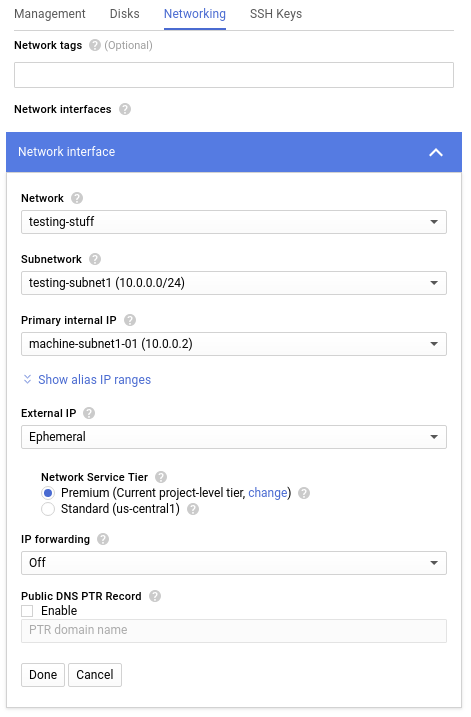 An important thing to remember is that subnets are coupled to a zone, so we need to create the machine in the zone it corresponds for the subnet it belongs. The screenshots above correspond to machine-subnet1-01, which is in us-central zone. The same process can be followed to create the other two machines.

The machines we just created are given an external IP address, but are not accessible because the firewall rules are closed by default. One of the first things you might want to do with your machines is SSH into them.

We can open SSH access to all machines in our network by creating a new firewall rule: 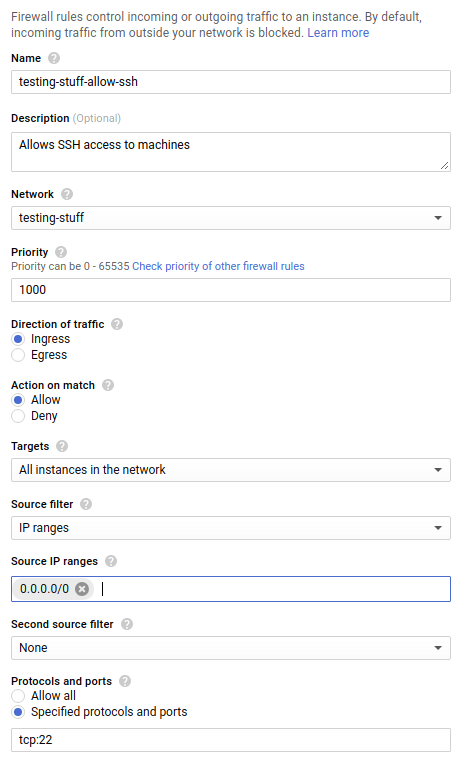 The name can be anything you want (I like to include the word allow in rules that allow traffic to flow). What the rule does is allow ingress traffic from any IP address in the world (0.0.0.0/0 is CIDR for this) to port 22 in all machines in testing-stuff network.

Before we can access the machines we need to register SSH keys with them. Generate an SSH key and add it to the list of SSH keys allowed by the machine 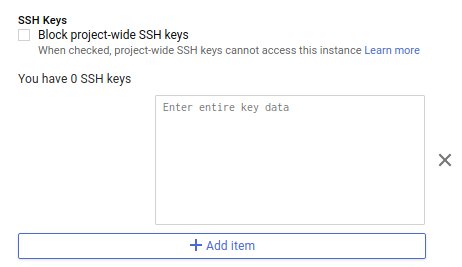 Now everything in ready to SSH to the machine:

Accessing machines in the network is important, but for our network to work we also need applications running on it to be able to communicate between each other. It would be possible to allow all traffic to flow freely inside our network, but that might be dangerous if someone gets access to our network. The safest thing to do is to allow traffic just where it is necessary. For example, if you have a MySQL database you probably want to open TCP port 3306 on the machine that is running it. Even better, you can allow traffic just from specific internal IP addresses. 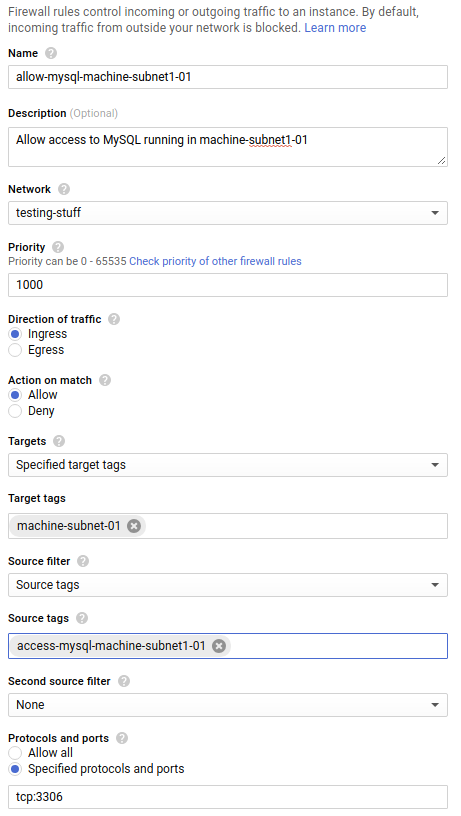 Customizing your network from here will probably consist on adding more subnets, machines or firewall rules according to the specific needs. Inside the network we just created we can use the internal IPs we assigned to communicate between machines, or we can use the hostname (e.g. machine-subnet1-01). The hostnames are only useful inside the network. If you want to be able to access one of your machines from the internet using a name, you will need to register a domain name and point your DNS to the correct machine.

Building a simple server with C++